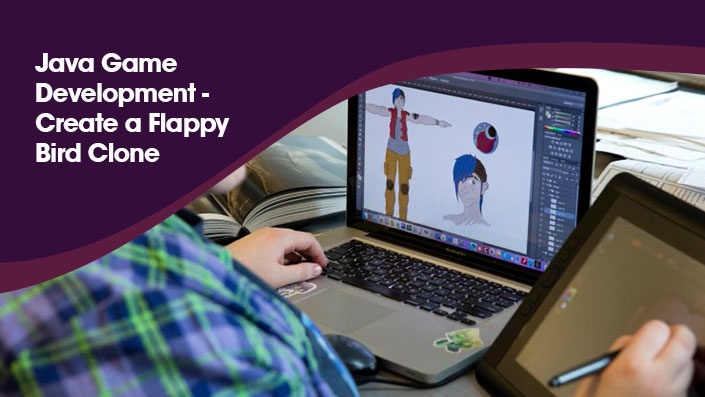 If you know anything about Java, you’ll know that it can be used in an almost endless number of ways. One of the most popular uses is for game development. Since gaming is a billion dollar industry and rising, there are plenty of exciting employment opportunities to be found. To get one of those coveted jobs however, you need to have the broadest skill set possible. A comprehensive understanding of Java game development is an excellent place to start.

The best way to learn a practical skill is by doing, and that’s exactly how this course works. You will focus on creating a clone of the popular Flappy Bird game, and along the way you’ll pick up everything you need to know about Java game development.

You’ll learn valuable concepts of games programming like effective game loops, loading resources onto your game, creating and customising windows, interfaces, games engines, and input handlers. Having completed the 28 lectures and 2 hours of content, you won’t just have developed a Flappy Bird game; you’ll have developed a solid framework that can be used for any 2D game.

This course has been designed with intermediate programmers in mind. You will need to be familiar with the Java programming language and comfortable with object oriented programming. If you are a complete beginner, we recommend starting off with one of our beginner level Java, game development or programming courses first.

Netbeans IDE: Netbeans is a free, open source Integrated Development Environment written completely in Java and intended for development solely in Java (although it does support other languages such as PHP, C++ and HTML5). It is a cross platform IDE that runs on Windows, Mac, Linux and Solaris and has a worldwide community of users and developers. It allows users to quickly and easily develop all manner of desktop, mobile and web applications. 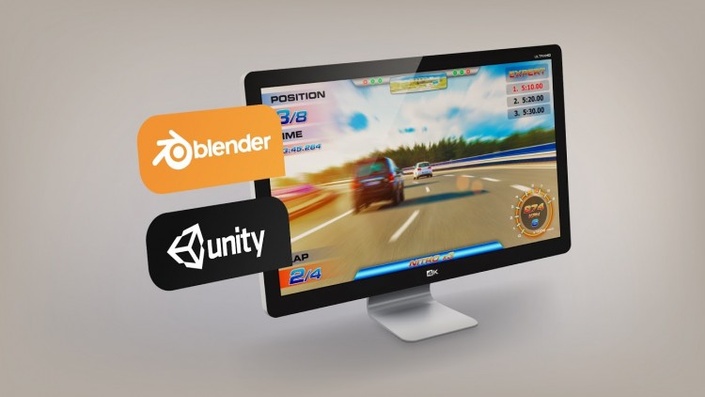 Game Hacking | Create a Game in 1 Hour
Crank out your very first game without being a coding genius. 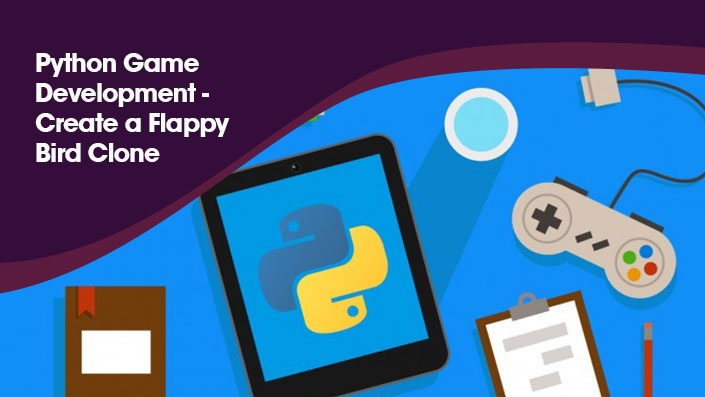 Games by their very nature are supposed to be fun. So why should the process of creating them be tedious and complicated? Instead of sitting through hours of lectures and game development theory, this course cuts to chase and allows you to create a game straight away, learning as you go.

Learn Python game development by creating your own game

Python game programming is a set of Python modules designed specifically for writing games. It allows you to create fully featured games and multimedia programs using the Python programming language. Python is highly popular and versatile, running on almost every platform and operating system out there; so mastering it is of enormous benefit whether you want to create Python games or pretty much anything else. By completing this course, you can create open source, free, freeware, shareware and commercial games using Python game programming.

This course contains 21 lectures and over 3 hours of content. It is intended for those who already have a working knowledge of Python programming or general programming, and who want to apply their skills to games development. However, beginners may still be able to follow the course too.

The main focus of this course is to create a clone of the smash hit (and extremely simple) game Flappy Bird using Python game programming. You will first be introduced to Python programming concepts and initial coding, and then delve straight into the making your game from scratch.

The first two elements of the game you will learn are the time clock and game over. From there, you'll progress to initial graphics setup including the background and adding graphics to the screen. Following that, you'll move on to working with coordinates.

The next few sections of the course focus in detail on creating input controls, boundaries, crash events and menu creation, as well as creating obstacles using polygons. Finally, you'll add the finishing elements to your game like game logic, score display, colours, and most importantly, difficulty levels.

By the end of this course you will have created your own Flappy Bird game from scratch using Python game programming and Python game development techniques. The skills you picked up along the way will give you a solid groundwork for creating bigger, more complex, and more versatile games that can be run on any platform or any operating system. 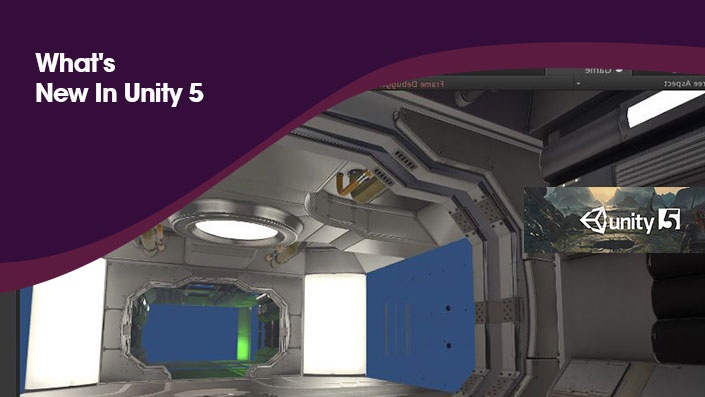 Learn the new features of Unity 5 in this course from Stone River eLearning that covers each of the new features. You'll learn what they are, how they work and how you can use them to create professional quality games with Unity 3D.

Unity 5.0 is the biggest and boldest release ever. Powerful new features in Unity 5 include:

And of course, many more new features and updates. Keep reading to learn more. 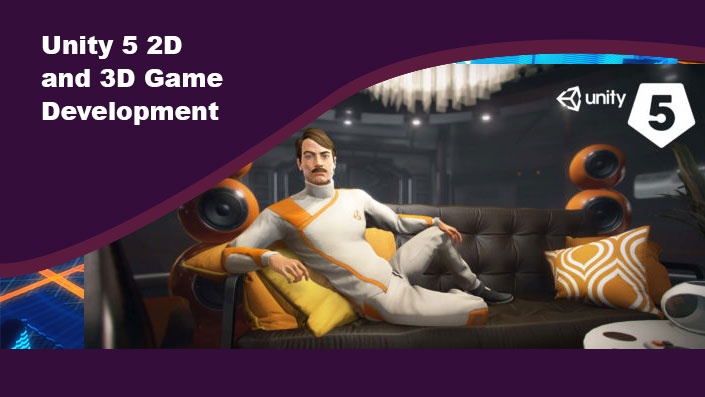 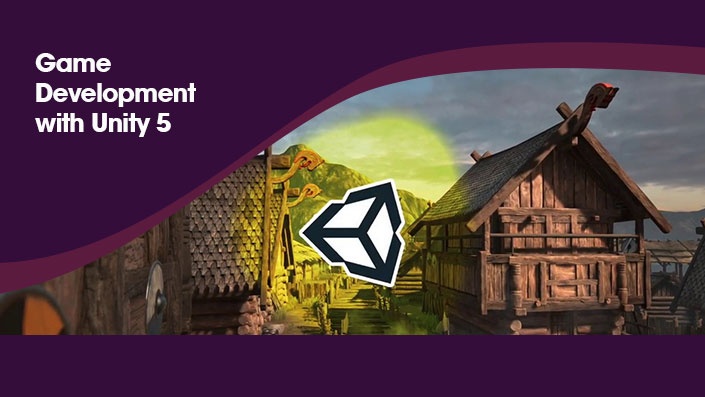 Game development is an ever changing, constantly improving, and highly dynamic area to work in. Things are on the move constantly, and if you’re not careful you can get left behind. That’s why it’s important to keep your skills at the top level and to familiarise yourself with the latest tools and programs out there. This course will do just that by getting you up to speed with Unity5, the newest version of one of the industry’s leading development engines.

Whether you’re completely new to game development or have gained some experience developing games with Unity already, this course is for you. With 85 lectures and 9.5 hours of content, it takes starts off at beginner level and advances up to more complex projects.

This course goes beyond merely explaining or showing you how everything works; you’ll be shown how, and then you’ll do it for yourself. As you progress through the course you’ll create three games of increasing complexity; a trivia game to demonstrate programming basics and show you the Unity user interface, followed by a 2D platforming game, and to finish, first person shooter game complete with visual effects and artificial intelligence.

This course emphasises coding and development, and is suitable for anyone who wants to learn to develop games or learn how to code. To start this course, you will need to have Unity installed on your computer; we’ll show you everything else from there.

Unity is a games engine used to create and develop 2D and 3D games and interactive experiences. It is fast becoming the industry standard for creating multiplatform games. Unity5 is the latest version of the tool, and includes a number of advanced powerful features such as a 64-bit editor, frame debuggers, graphics command buffers, and more. 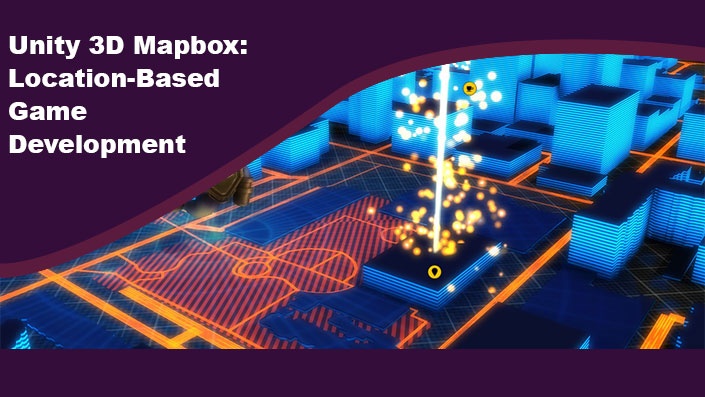 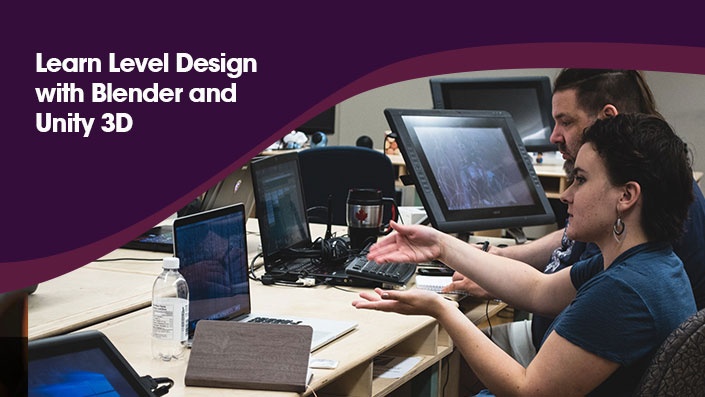 Level design is a critical component to all games, but a component that can be difficult to get right. Anyone with graphics experience can in theory create a functioning single level game; but creating a game that's interesting and enjoyable as well as functional takes some finesse. Mastering Blender and Unity 3D is a sure fire way to make your game level design all of this, and more.

Develop your level design skills to the highest standard

1.Understand game level design in both conceptual and practical terms

4.Construct and operate a full game level on Unity 3D

Blender and Unity 3D are both open source programs used by games designers all over the world. Developed by their community of users, they construct games that operate on almost all platforms; from consoles and desktops to mobile and websites. Gaining a knowledge of both programs is hugely beneficial to any game developer, as it fine-tunes your insight and intuition for creating multi-faceted, compelling and exciting game levels. Whether you're still coming to grips with level design or already have a wealth of experience under your belt, learning level design with Blender and Unity 3D will ensure your skills are up to date and flawless.

This course includes over 66 lectures and 5 hours of content, suited to anyone with a basic understanding of Blender and Unity 3D. If your interests lie in level design, 3D modelling or texturing, then this course is for you.

You'll first learn about the concepts and best practices of level design, from setting goals and getting references to planning and mapping out your level in Photoshop. You will then move on to modular design and complete basic object manipulation tasks; the first step to creating a full game level.

You will go through each aspect of level design in detail; floors, ceilings, walls, focal points, props and other objects, filling in your level as you learn. Then, you'll add intricate texture to each of these elements, bringing your level design up a notch from basic to something much more professional looking.

Reviews and quizzes have been incorporated into each section of this course so that the material covered is constantly refreshed. On completion, you will take away an up to date skill set in Unity 3D and Blender. You will have an understanding of graphics software, game engines, game level design, and how all of these elements work seamlessly to create fun and engaging games. 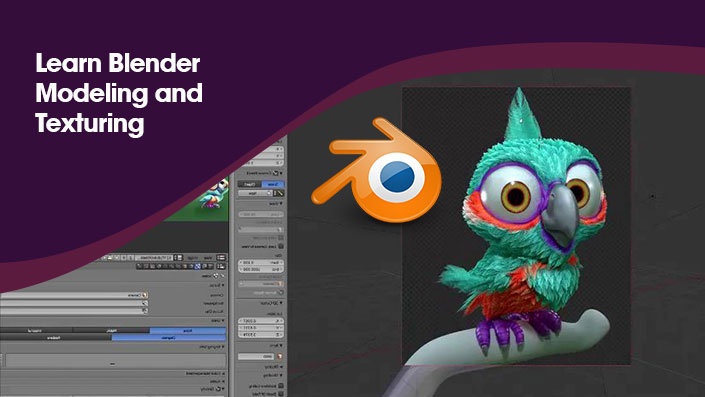 What You Will Learn

In this course you will gain the skills to create and texture 3D models. This Learn Blender course covers the fundamental tools you will use for modeling in Blender. You'll receive an overview of how to give your models, materials and textures a professional look, with extra detail and color to make then look complete and professionally done.

What You Can Do After Taking This Course

By the end of this course you should have an understanding of modeling and texturing that will allow you to build and learn more on your own. You will be provided with additional Blender learning resources and project files to continue learning and practicing after you've completed the course. 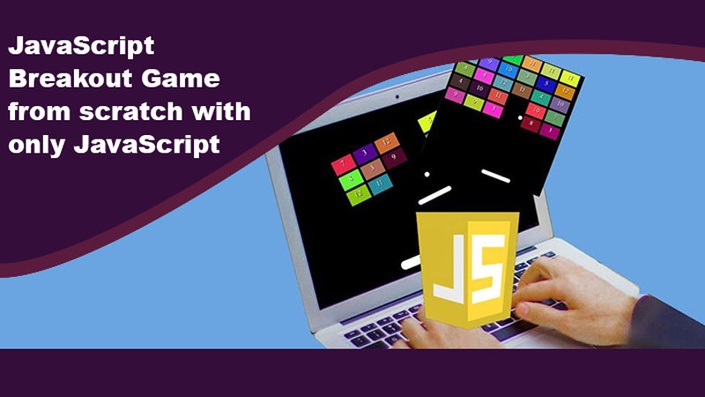 JavaScript Breakout Game from scratch with only JavaScript